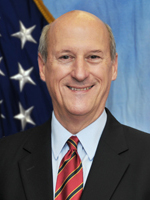 Judge Allen was the founding partner in a law firm representing individuals primarily in the areas of Workers’ Compensation and Social Security. He practiced in that area for over 32 years.

Judge Allen holds a B.A. from Ashland University, a J.D. from Ohio State University and is admitted to the Ohio Bar.

Judge Allen will present, “An ALJ Perspective” on Monday, August 10 at the Monarch Hotel.